The Rail Ale Trail is now an established annual event on the railway. More recently, the rail part has been restricted to the line in the valley, rather than including the Cauldon Lowe Branch. However, the basic attraction of beer on the trains, beer in the stations and beer in the pubs has remained the same.
By 2011, I'd been exploring the Churnet Valley, on and off, for eight years. In all that time, despite taking numerous photos and videos from the sidelines, I'd never set foot onto railway property. In July, however, an incentive came along for me to ride the rails, at last...

The incentive was beer. There was beer in the stations, beer on the trains and beer at the participating line-side pubs. In true beer festival tradition, souvenir glasses were on sale and a wide selection of beers were available straight from the barrel. The fun started at 11:00am. 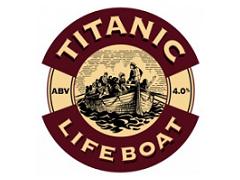 The event was supported by the Titanic Brewery, which produces real ale in Burslem, Stoke-On-Trent. Their brew, "Lifeboat", was the one available on the trains. I particularly liked their "Plumb Porter", too. Other favourites on the day were Shugborough Brewery's "Lordship's Own" and "Mi'Lady's Fancy", produced by Titanic at Shugborough Hall.

My first trip up the line was behind GWR Large Prarie 5199. Being up high on the train gave me a new perspective on the valley, including a new view of the Black Lion and its beer garden.

Steam services were only running on the C.V.R. as far as Leekbrook, so, as we sat in what remains of Leekbrook Station, the loco. ran round to the other end of the train to haul us back to Froghall.

I didn't stay for the whole trip, because I was getting hungry, so I got off at Consall and went to the Black Lion, where the hog roast was on.

After filling my belly with food and more beer, I headed back to the station, to wait for the train to return from Froghall. And buy more beer.

The train arrived and I re-boarded. Shortly afterwards, the D.M.U. arrived at the other platform, returning from Cauldon Lowe.

The track ahead was now clear, so we could set off back towards Leekbrook, heading north beside the canalized section of the River Churnet.

After running round at Leekbrook, again, I decided to get off at Cheddleton and buy a supplementary ticket for the Cauldon Lowe Branch. And more beer.

Eventually, I boarded the D.M.U. heading for Cauldon Lowe. After passing through Leekbrook, we left the Churnet Valley behind and began the long climb to the summit of the Cauldon Lowe Branch. Soon, we were crossing the viaduct over the main road through the village.

Slowly but steadily, amidst a cacophany of rattling and in a fog of blue oil smoke, the D.M.U. hauled itself up the 1 in 40 incline at Ashenhurst Mill. As we neared the top, vistas began to open up across the un-named valley on the north side of Ipstones Edge. This was, by far, my favourite rail experience of the day.

The views from this high part of the line, across the moors up to Morridge and down to Waterhouses, were well worth the extra £5. At the end of the line, the train halted at the buffers within sight of the quarries at Cauldon Lowe and I bought a beer to celebrate while the train crew changed ends for the journey back to Froghall.

And that was about it. The D.M.U. took me back to Froghall, where I had one last beer in the station, before having two more last beers in the recently-reopened Railway Hotel. Eventually, I made it back to Derby for more beer followed, the next day, by a monumental hangover.